DUI programs are licensed by the Department of Health Care Services to provide a less intensive level of outpatient alcohol and other drug treatment services focused on improving public health and safety by reducing and/or eliminating additional DUI offenses.

These services consist of education classes (prevention); individual and group counseling sessions (intervention); and in some county’s individual client involvement in additional county requirements to facilitate ongoing recovery from the abuse of alcohol and/or drugs.

The intent of the California Legislature in establishing a system for addressing the driving-under-the-influence problem was to establish a statewide network of DUI treatment programs. That network would provide education and counseling to individuals convicted of a driving-under-the influence offense, with major goals of reducing recidivism and improving public safety.

The Legislature mandated that the system would be one hundred percent (100%) self-funded, i.e. individuals convicted of a DUI offense would pay all costs for the delivery of program services, including costs incurred by the county and state in developing the system and providing ongoing oversight. No taxpayer money (county, state or federal) was to be used to operate the system at any level.

DUI programs are governed by California Code of Regulation, Title 9, Chapter 3, contracting with the County and licensed and monitored by the State of California Department of Health Care Services, DUI Branch. Program services including fees charged participants are initially approved by the county, with final approval by the State’s Department of Health Care Services.

One major component of each county’s responsibility was to recommend sufficient programs to adequately serve the DUI offender population within all catchment areas of their county, while ensuring that the number of programs recommended was not excessive as to prevent the licensed programs from maintaining economic viability. This was an initial responsibility, and continues to be an ongoing responsibility of the County Alcohol and Drug Program Administration.

As the statewide system matured, the State expanded Title 9 regulations to establish the requirement for counties recommending additional DUI treatment programs, to justify the need based on objective, measurable criteria. This was (and is) to prevent the establishment of new programs where there is no need for same, where doing so would reduce the ability of existing DUI treatment programs to remain economically viable.

Consistent with state regulations, DUI treatment is provided by alcohol and other drug counselors certified under Chapter 8, Division 4, Title 9, California Code of Regulations. 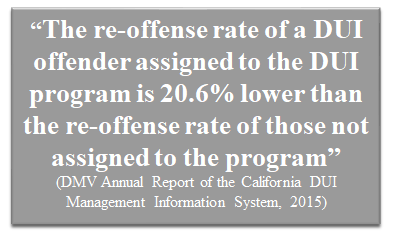